Those in favour of the ban cite the dangers related to cryptocurrency scams – namely the ability for new and uneducated individuals to lose large sums of money when investing in ICOs due to their sometimes fraudulent nature.  While many people are familiar with crypto coins such as Bitcoin and Ethereum – there exists an entire ecosystem known as Alt-coins which in short are cryptocurrencies that promise high returns with equally high-risks of failure.

The problem arises when these ICOs fail to make good with their promises and instead funnel investor funds out of the company and disappear – committing investor fraud.  While these criminal acts are completely reprehensible, critics state that Google’s response and solution to these isolated incidents is far too overreaching.  Honest and innovative crypto companies that rely heavily on Google’s ad-based services to reach clients, will now have their online presence crippled. 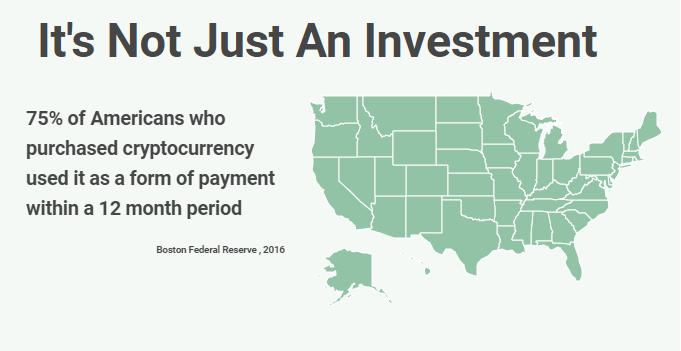 In Google’s blog post explaining the changes being made to their AdWords services, crypto related content was classified as an emerging threat due to its supposedly unregulated and speculative nature – despite the fact that governments have already begun to rapidly implement new laws and regulations to control the industry.

Regulations and a supposedly established market nevertheless does not ensure the safety of the consumer.  The credit card industry is a perfect example of a regulated, but deeply flawed system whose consumers are sometimes subjected to criminal activity. 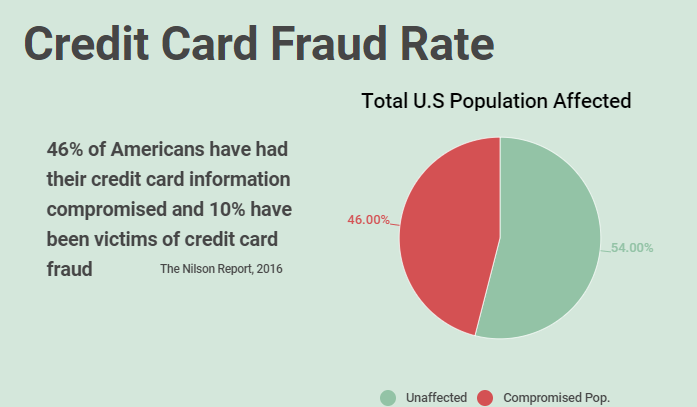 “Among victims who reported direct financial losses, the average was $7,761 and the median was $2,000 per victim.” 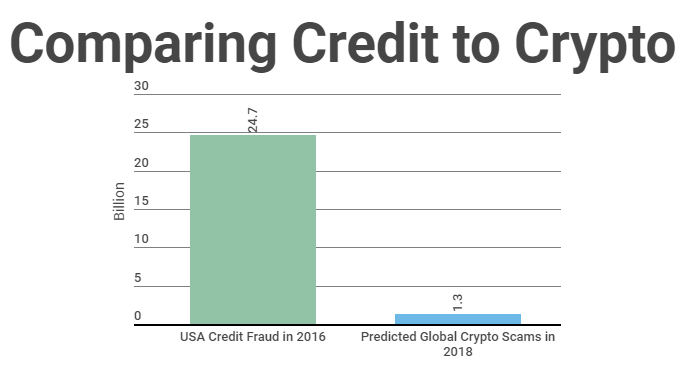 Global cryptocurrency scams in 2018 are predicted to only reach $3.3 billion by years end, a far cry away from the staggering amount of credit card fraud found in America alone.

When comparing just American credit card fraud statistics to that of global cryptocurrency scams, consumers are still 140% more likely to be a victim of credit card fraud than a victim of their crypto counterparts.  It should be noted that while debt from credit cards are reported from 2016, it is expected to increase to $31.26 billion by the end of 2018.  With these figures in mind, we have yet to see any regulation to mitigate credit card fraud within the digital advertising ecosystem. 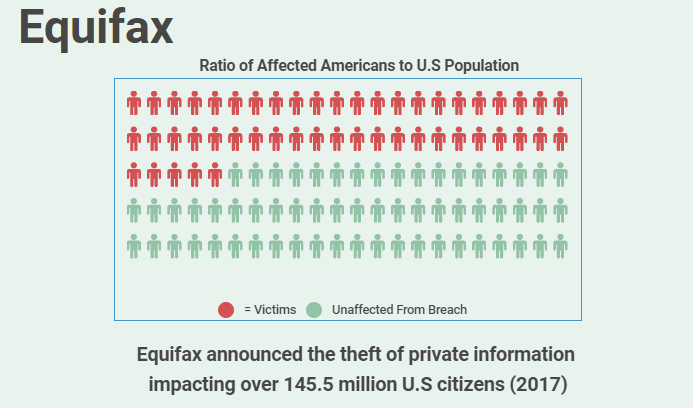 In 2017, the infamous Equifax breach saw the personal information of 145.5 million Americans compromised.  With the names, birthdates, social security numbers and driver licenses of half the American people at risk, Equifax faced serious backlash from the general public.  Allegations surrounding former executives at Equifax suggests insider knowledge of the leak was leveraged to sell off stock prior to the breach going public.

As a company charged with the protection of highly sensitive information, it is vital that they act in a moral and responsible manner.  Googles’ willingness to accept the lapses in judgement on Equifax’s part, by allowing them to continue to advertise on their platforms should be taken into account when considering the platform wide ban on crypto related content.

It could be argued that the Equifax hack and the figures tied to credit card fraud are not actually the corporations fault, but instead the actions of a few bad apples.  This line of logic however can be directly applied to the emerging crypto ecosystem – where the industry as a whole is dedicated to creating innovative products with blockchain technology, but are given a bad reputation by the criminal actions of a small minority.

Fraud and suspicious activity is not always the result of external forces – take for example HSBC, one of the largest financial institutions on Earth.  HSBC knowingly laundered $7 billion of Mexican drug cartel funds into the United States and were fined $1.9 billion by the American government. 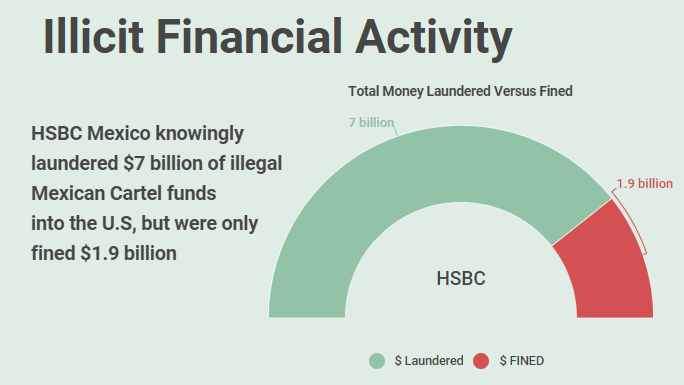 As corporations and industries grow in influence, there comes a certain level of social responsibility to ensure actions are morally and lawfully abiding.  Despite these expectations, Google has continued to allow financial institutions to promote their ads on their platform.  Bad PR and controversial scenarios are a fact of life when running a corporation and Google, as well as other advertising platforms, are well versed in this fact.  As a paying customer, all companies who employ the services of these platforms should be granted the same level of understanding.  The discrepancy becomes apparent when the crypto industry is subjected to a higher standard of operation than their more traditional counterparts. 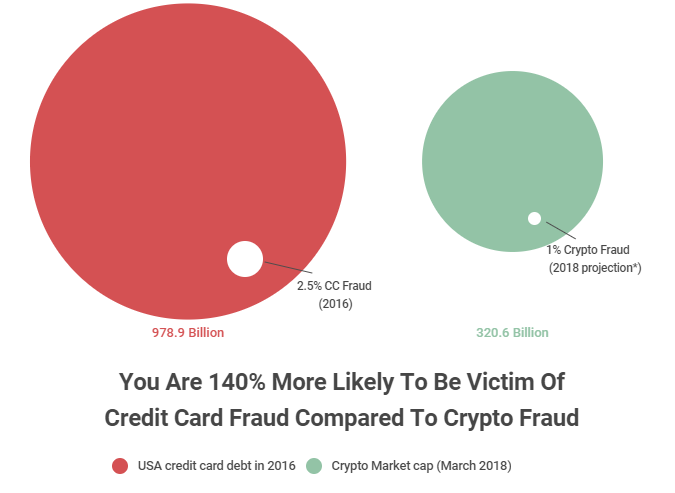 While Google is attempting to protect their consumer base with the new crypto related policies, these regulations can be better implemented.  Instead of completely banning all crypto from their AdWords platform – Google and advertising services as a whole, should focus more heavily on developing a system of vetting the advertisements submitted to them.  While it is clear certain ICOs and related services are attempting to play the system – there are many honest and trustworthy crypto related firms who pay for Googles’ AdWords services deserve to be heard by the search-engine giant.  Online advertisers in the credit card, banking and privacy industry have undergone similar issues regarding fraud and yet the crypto community has been singled out as being unfit to advertise on Googles’ platform.  Those in the crypto ecosystem should be afforded the same opportunities to grow their business as those in any other industry.

This ban is a reflection of a sweepingly lazy effort by digital platforms to regulate their market space without acknowledging the interests of many legitimate businesses. So, the question left here is, will Google take proper measures to regulate the crypto market space on their platform, or maintain the seemingly platform wide crypto ban?

Spencer, Scott. “An Advertising Ecosystem That Works for Everyone.” Google, Google, 14 Mar. 2018, blog.google/topics/ads/advertising-ecosystem-works-everyone/. 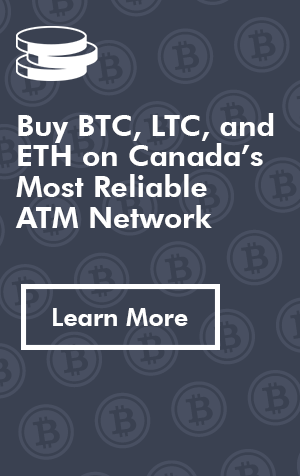